During the trainings at sea, the ships of participating countries will perform joint tactical maneuvers, train in the organization of communications, practice mine countermeasures operations, and the transferring of the cargo while underway. The crews of the ships and boats will work out the issues of interactions together with tactical and naval aviation, and also will conduct a series of trainings on anti-aircraft, anti-ship, anti-boat defense during the sea passage, and also will work on the tasks on the naval interception and inspection of the trespassing ships.

This was reported by the Ministry of Defense of Ukraine.

“This year, due to the coronavirus pandemic, the international trainings of the “Sea Breeze” series will be limited to the maritime phase along with the involvement of the aviation. All the joint actions will take place in the Black Sea water area without the contact of the personnel. 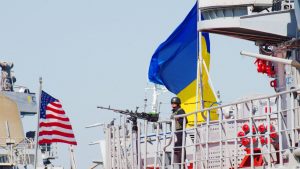 – The participation of the United States in these multinational trainings, over and over again, affirms the commitment of the US Navy and the 6th Fleet in particular to our allies and NATO partners. The “Sea Breeze” trainings are real demonstration of the United States’ determination to defend Europe collectively. Therefore, these trainings together with our partners will take place in the Black Sea area”, noted the Commander of the 6th Fleet of the US Navy, Vice Admiral Eugene Black.

According to the Commander of the Naval Forces of the Armed forces of Ukraine, Rear Admiral Oleksiy Neyizhpapa, the main purpose of the “Sea Breeze” program is the maintenance of stability and security in the Black Sea area. Therefore, the main task for the maritime component of the trainings is a rehearsal of the operations according to the standards of the Alliance, which targeted at the peace and security arrangements in the crisis region.

According to plan of the National Navy Command, one of the instruments of the “Sea Breeze” series of trainings, which should be used as effectively as possible, is change-over of the Ukrainian Navy to NATO standards. In other words, during the trainings, the ship and boat tactical groups of the Ukrainian Navy should acquire the necessary level of interconnectivity, the combat and operational capability to act in cooperation with the ships of the Alliance”, states the message.

The multinational military trainings of the “Sea Breeze” series are being held since 1997.

Every year, Russia tries to actively counteract the joint Ukrainian-American trainings. Thus, in 2019, one of the locations of the maritime component of the “Sea Breeze” trainings, which started on July 1 in the south of Ukraine, had to be changed, just before the day of the trainings because of a warning from Russia to close one of the Black Sea areas.

Also, last year, in the midst of NATO and Ukraine trainings, a group of warships of the Black Sea Fleet of the Russian Federation Navy also decided to conduct the combat trainings. 10 ships of the Black Sea Fleet of Russia are involved in the trainings. Particularly, among them are major landing ships “Azov” and “Tsezar Kunikov”, minor missile ships “Orekhovo-Zuevo” and “Mirazh”, missile boats “Ivanovets”, “Naberezhnye Chelny” and “P-60” etc. This was reported by the Ministry of Defense of the Russian Federation, which message states that mentioned ships “will control NATO warships” participating in the “Sea Breeze-2019” trainings.

Kherson rescue group clearing mines in a torpedo-boat, which sank during the World War II

The “Sea Breeze” trainings started in the Black Sea