Officers of the Security Service of Ukraine exposed contrabandists in Kherson region, who organized the illegal production of cigarettes and supply of this product to the European Union.

This was reported by the Security Service of Ukraine.

“Security Service of Ukraine officials exposed contrabandists in Kherson region who organized the illegal production of cigarettes and its supplying to the European Union.

The malefactors grew mere plantations of tobacco at an abandoned farm. Raw materials were transported to Odessa and Dnipropetrovsk regions. And already there, up to 15 thousand packs were made every day and marked with world brands. Then, the “product” was being delivered to Europe via Transcarpathia”, – stated in message. 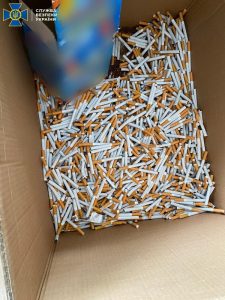 During the searches in four regions together, law enforcement officers have found more than 1.5 million packs of cigarettes and almost 15 tons of ready-to-pack tobacco.

Upon preliminary information, criminals were making up to 15,000 packs of cigarettes every day. The finished product was transported to Transcarpathia, where it was being sorted for further transportation to Europe.

Tobacco plantation at the “abandoned farm” and 1.5 million packs of counterfeit cigarettes were exposed in Kherson region

In Mykolaiv, frontier guards together with police exposed a criminal group